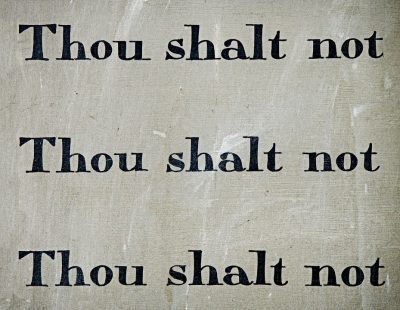 The Ten Commandments form the foundation for honoring God and relating to fellow humans. After reading The Second Mountain: The Quest for a Moral Life by David Brooks, though, I think we could add a couple of others for the era in which we live.

Brooks, a journalist and commentator, offers a candid glimpse into his own personal faith journey. Raised in Judaism but profoundly influenced by Christianity, he sees himself living a curious tension. On the one hand is his Jewishness, a pushiness that emphasized ritual and obedience and loving-kindness (“chesed”). On the other is the Christian influence that focused on grace, forgiveness, and selfless acts of love, all done in submission to the person of Christ.

He calls himself a cross between a “wandering Jew” and a “confused Christian.” As he chronicles his curious push-pull journey towards faith, I see commandments eleven and twelve emerging.

Brooks is perhaps the most eclectic author I’ve ever read. He sees himself as a middleman in the world of wisdom. He claims not so much to come up with new thoughts as to assemble and pass on other people’s knowledge.

He’s selling himself short. The new learnings he encounters would be lost without him investing himself emotionally in them.

The people he reads and talks to are exhaustive in scope. Drawing from all disciplines, and without judging, he listens to and echoes voices past and present. Psychologists, philosophers, sociologists, rabbis, priests, mystics. He is intensely curious, reading and asking questions of everything he comes across.

Bumper-sticker faith (“The Bible said it–I believe it–that settles it”) shrivels in the heat of this questioning. It’s exposed for what it is: people deluding themselves because of their need for security and identity. To fantasize a black-and-white world where everything is explained in simplistic fashion, and questioning is forbidden, is faithlessness. It also leads to prejudice and polarization.

The act of questioning can be an act of faithfulness. When you don’t settle for small answers to big questions about life, you’re seeking a Mystery that always stays a few steps ahead. You’re intrigued, driven on in a journey that puts you in your place and God in God’s.

Closely related to learning is experiencing the world as it really is, in both its beauty and rawness.

The premise of his book is that we often need to go through suffering, grief, and failure to emerge into a more realistic, purposeful  life. This takes us from the ego-driven first mountain to the ego-loosening second.

He makes this personal by relating the shattering effect of his own divorce a few years ago. He had felt good about his own progress in life. Proud of his accomplishments. And then his personal life collapsed.

His pain made him vulnerable, open to new resources and directions. He said that it was during this darkness that he found the beginnings of faith. He became “porous” to mystical experiences that came out of nowhere, pointing to a “deeper reality.”

Similarly, facing the depths of life draws us to new encounters. We’re more receptive, without censor or bias. Deeper reality peeks through from any source, especially from sources we wouldn’t seek if everything was rainbows and daffodils.

When we hurt large, we need a larger perception of the world in order to heal the pain and grow stronger. Fearlessly experiencing life in its depths is refusing to put small Band-Aids on gaping wounds.

These two commandments are counter-cultural in 2019.

We naturally seek validation for what we already feel (feel precedes think) to be true. Conservatives tune in Fox; liberals, CNN. Social media algorithms feed us stories that confirm our prejudices.

We seek quick fixes for problems that have deep roots. We prefer existential opioids to addressing the underlying issues. Pain opens the door for new directions. We resist its opening and, when it does, ignore it anyway and go through the one leading down the familiar, deep-rutted path.

I’m a Christian. What can I learn from other faith traditions? From atheists and agnostics? All perceive life in ways that can be illuminating.

I’m a white, straight, AARP-card carrying, American male. What can I learn from non-whites? From gays and bi’s? From trans? From Millennials and Gen-Exers? From immigrants?

Broadening mind and heart to embrace a world larger than the one I see through my narrow lens strikes me as a sincere act of devotion. Maybe Brooks’ book is a long devotional.

In the end, obeying numbers eleven and twelve is a sure way of honoring number one.

“Don’t have any gods other than me.”

7 thoughts on “Commandments Eleven and Twelve”