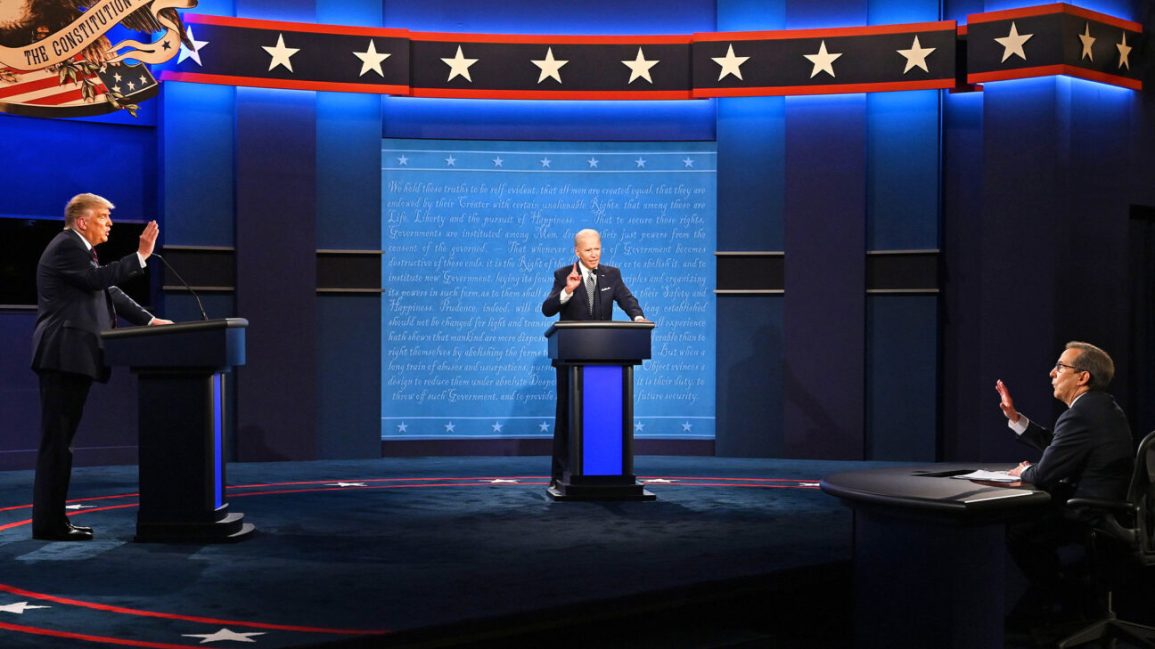 Probably like some reading this, I felt physically nauseated by the recent presidential debate. I even had trouble sleeping. Visions of constant insults and interruptions haunted my night like Scrooge’s ghosts from A Christmas Carol.

The haunt-in-chief was President Trump. I thought his behavior in the hour and a half debacle was deplorable. Couldn’t everybody see that?

Reading Facebook posts the next day, some were eviscerating Biden.

“I give props to President Trump for not slapping the crap out of silly Joe!!”

“Biden lies way too much, and Trump set him straight.”

“He’s so delusional! And he calls Trump a liar!! What a jerk!”

Well, no one can say that my Facebook feed is slanted to the left.

Reading this string of comments, one question came to mind: “Were we watching the same debate?”

There is, of course, no reason to be surprised. We’re all entrenched in “confirmation bias.” Our mind is already made up, so we search for that which validates what we mistakenly think is self-evident truth. As psychologists Simon and Garfunkel once sang, “A man hears what he wants to hear and disregards the rest.”

If you’re pro-Trump, then Biden represents all that is wrong with America. You’ll pick and choose from the debate things that support that. You’ll note his “lies,” the times he seems flustered, the way he’d interrupt our president, the evidence that he’s a puppet of the far left.

Similarly, since I’m left of center, I’m biased on Vice President Biden’s behalf. I’ll look for things that pump him up. I like his effort to see a bigger picture, his experience, his willingness to transcend party lines, his stance against racism. This is what I saw the debate bringing out.

So, as they say, we Americans agree to disagree, with varying amounts of tolerance according to how far on the edges of the political universe we find ourselves. We ought to have empathy for the other side, whichever side that may be. As one comedian put it, “Empathy is putting yourself in the shoes of the person you’re yelling at.”

There is, though, one objective standard by which to judge this debate.

As a Christian, I have a problem with anyone who bullies.

The president’s gameplan was to attack and humiliate his opponent, making it personal. He was the one who first, and loudly, interrupted, and he kept it up. He set the tone. It’s sad that Biden was so fed up that he told him to shut up and called him a liar and a clown. It was his visceral reaction.

Given Trump’s stated strategy and the way he carried it out, I can’t see how anyone can fail to see who the bully was.

There is the law of bully-karma, though. Bully people enough, and you expose your character.

Growing up skinny and red-headed in Poplar Bluff, I was a walking invitation to be bullied. It came in Junior High, when a big eighth grader made it loudly known in the cafeteria that he was going to beat my butt after school. My demise would come in the parking lot at 3:05.

I made the decision to stand up to him. It was pragmatic. If I didn’t show up, I’d be unmercifully picked on for eternity. I’d rather get in a few punches while getting demolished instead of live in fear.

When the bully approached, accompanied by a couple of his toadies, I assumed my fighting stance. It was something I’d seen in a karate book and must have looked ridiculous. Yet, incredulously, “Butch” said, “Kid, I don’t have time to fight you today.”

I heard myself reply, “You’re the one who wanted to fight. I’m here. Let’s do it.”

“No, I’ll be late for choir practice at the First Baptist Church. But you show up tomorrow, and I’ll beat your butt.”

He reconciled with me the next day, explaining we really didn’t have to fight after all.

I have no delusions that Trump will ever seek reconciliation. He’s no choir boy.

Bullies are bullies, though. When confronted enough, their shallowness, flaws, and insecurities will eventually shine through. My prayer for our president is that, perhaps like “Butch,” he sees a side of himself that shouldn’t be repeated. My prayer is that the nobler parts of his personality will come through.

At least that’s the way I see it.

And who knows? Maybe the next debate will focus on issues.

3 thoughts on ““Were We Watching the Same Debate?””