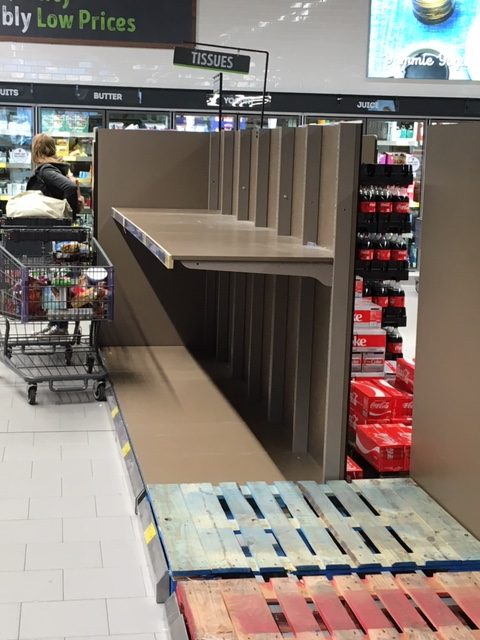 Of the many stories circulating around the COVID-19 pandemic, one of the most bizarre is that of a run on toilet paper. Some stores across the nation are so low on their supply that they have had to ration how many packages a customer can buy. There have been at least two accounts of people fighting over the last one.

Why toilet paper is singled out may remain one of the great human mysteries of our time. Nevertheless, the motive behind it is the same as the one behind grocery stores selling out of milk at the broadcast of a winter weather warning. We fear the unknown, and want to do our best to prepare for the worst. Our first priority is to make sure we and our loved ones are safe and provided for.

The early Christians, though, responded to a crisis in a very different manner.

A plague, possibly of smallpox, swept across the Roman Empire around 250 A.D. It was estimated that at its height, 5000 people died daily in Rome. Even though there was no scientific knowledge to explain the disease, people knew enough that to be around a sick person was dangerous. Consequently, many of the infected were sometimes thrown into the streets and left to die.

In the face of such terror, Christians responded by not running from, but running to, the ill. They ministered to those others avoided, at great risk to themselves. They tended their fevers, provided relief as best they could, and prayed with them as they died.

The early believers reached out to all who were infected, whether Christian or not. Indeed, some they cared for were the very ones who had persecuted them for their beliefs.

One of the reasons the early church grew was that it demonstrated in concrete ways such unconditional, sacrificial love. Those unfamiliar with their beliefs, or perhaps even hostile to them, could not argue with the sincerity and devotion of such loving people.

The early Christians can instruct us modern ones. If we believe what we say we believe, shouldn’t we behave a bit more like our spiritual ancestors?

That of course doesn’t mean taking the risks of self-exposure like they did, which we now know will only spread the disease. It does mean, though, letting our faith inform our response to the jolting pandemic headlines that bombard us.

These early believers displayed a sense of calmness and confidence in the midst of chaos. It was grounded in their hope that God wasn’t an absentee landlord. Indeed, if God worked through the cross to bring about resurrection, then God is familiar with working in a time of uncertainty and fear.

Can we share the hope that our spiritual ancestors demonstrated? If so, then we will not contribute to the hysteria but help provide a path through it.

Father Henri Nouwen wrote, “A man or woman without hope in the future cannot live creatively in the present.” If we share the hope of the early Christians, then we’ll use this crisis to demonstrate radical creativity. In what ways may we still be in community together? How may we show compassion to the ill, especially the vulnerable? How are we called to sacrifice our rights and privileges for the sake of keeping others safe? In a time when things are shutting down out of fear, what things may be started up, out of hope?

How we live out our faith, when the sun is hidden behind the clouds, is the litmus test of discipleship. Hope that fosters creativity demonstrates a faith that is authentic as well as contagious.

Also, I’m sure that in the process of living faithfully through this time, we’ll have enough toilet paper.