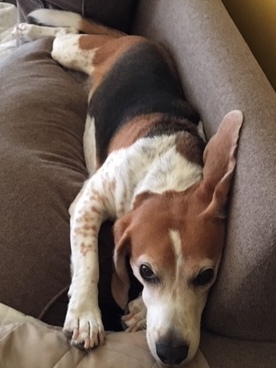 NOTE: This week I’m sending a daily devotion based on reflections on Jake the Beagle. Our regular weekly/Monday meditations will resume tomorrow. Hope these have been meaningful for you!

Like most dogs I’ve ever known, Jake could fall asleep in a nanosecond. And not just a light sleep. Before long his patented beagle snore would fill the room. We had to buy an air purifier so the noise would drown out his snoring.

Eventually his eyelids would do that REM-like rapid blink, his paws would twitch as if he were running, and he’d let out a subdued howl. What was his canine brain dreaming? Chasing a rabbit or another deer? Running with a pack?

Because he loved sleep so much, and was so good at it, he made elaborate preparations. He had a ritual of scratching on a sofa or blanket, to make it extra comfy. Then he’d circle around, as if chasing his tail, for three or four times; this was to get in just the right position for maximum comfort. Then, at just the right moment, he’d settle down into one of two classic dog-sleep postures: a curled up one or one that was lying on his side or belly. Regardless, he’d take a deep breath, blow it out, then settle into sleep mode.

There was only pure relaxation. Unbridled dreams of running through fields, romping with other dogs, smelling amazing smells, discovering food dishes that never emptied.

In Jake’s final couple of days, he suffered brain seizures, probably from a tumor. His body would spasm and twitch uncontrollably. When nothing could be done, we made the difficult decision of euthanasia. As the vet administered the medication, our beagle friend slowly calmed down then finally rested. It was as if he’d settled down for just another nap, as he’d done several times each day at home.

Could our friend’s sleeping be but his way of preparing for inevitable death? If so, maybe death isn’t quite as scary as we might think.

Goodbye, Jake. Hope to see you when we wake up some day.

After saying this, Jesus told them, “Our friend Lazarus has fallen asleep, but I am going there to awaken him.” — John 11:11

5 thoughts on “SUNDAY MEDITATION: Sleeping Like a Dog (September 6)”