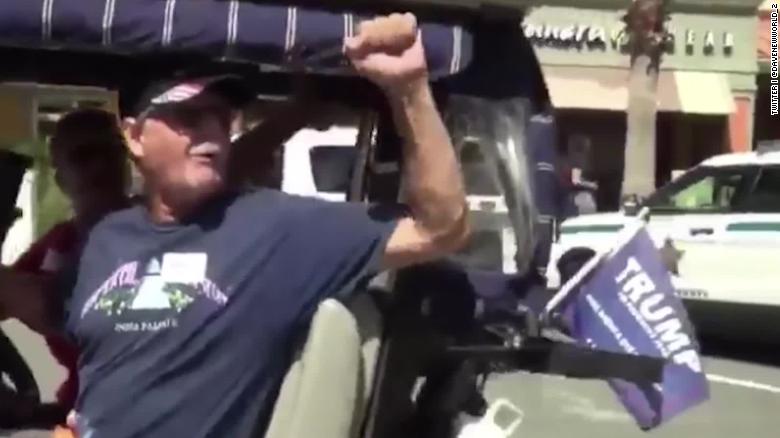 Supposedly, the older you get, the wiser you become. Life’s experiences deepen character. You’re more patient, understanding, empathetic, and kind. Things become more flexible and conditional, and less inflexible and absolute. Younger generations discover how to cope with life, and prosper in it, by learning from wise silver-haired gurus.

This is the theory. Unfortunately, incidents like what happened recently at a Florida retirement community called The Villages show that we’re never too old to still be tacky.

On June 14th a group of seniors paraded in golf carts on behalf of President Trump. The sidewalks were lined with anti-Trump seniors. It got very ugly. Both sides screamed and pointed at each other, lobbing curses and obscenities with the force of a mortar.

This scene of older people behaving badly made national news. It generated a lot of laughter from younger generations. As one person tweeted, we’re watching a wave of activism that nothing can stop ”except stairs and high curbs.”

I wonder what the grandchildren of these F-bombing brawlers thought when they saw Grandma Ethel almost duke it out with a MAGA man.

Didn’t life teach these people anything?

Why didn’t they learn that a person’s opinion doesn’t diminish your own, and there’s no need to attack them?

Or that you can stand for what you believe without needing to demonize the other side?

Or that a person you disagree with thinks they’re just as right as you are, and calls for curiosity not anger?

Or that we all are really flawed people and need each other to see things better?

I don’t agree that we live in the most divisive of times, as a rumble on a street in The Villages would seem to reflect. We’ve always had such skirmishes, regardless of age or era. The problem is that people just have a hard time growing up. We enjoy the adolescent, insecurity-based fantasy of absolute right/wrong, good/bad, win/lose, us/them.

The call of discipleship requires “giving up childish things,” as Paul once said. It’s a call to maturity. The early church thrived on the very plurality we seem to have difficulty with. Even though those Christians assembled from a fragmented, divisive society, they embodied a tight-knit community that stood out. Indeed, it might not have been the teachings of Jesus, but the embodiment of those teachings in how the believers loved each other, that energized the church’s exponential growth.

I really don’t hold out much hope that our nation is going to have a come-to-Jesus revelation and grow united. There is simply too much playing to our baser instincts to see this happening anytime soon, if ever. However, we who say we’ve already come to Jesus must prove it to the world. I dare any of those geriatric combatants in The Villages to go to church and not feel hypocritical.

We who are Christian must model maturity to an adolescent nation. Regardless of age, we’re never too old to be patient, understanding, empathetic, and kind. It’s also never too late to try.

10 thoughts on “Never Too Old to Be Tacky”